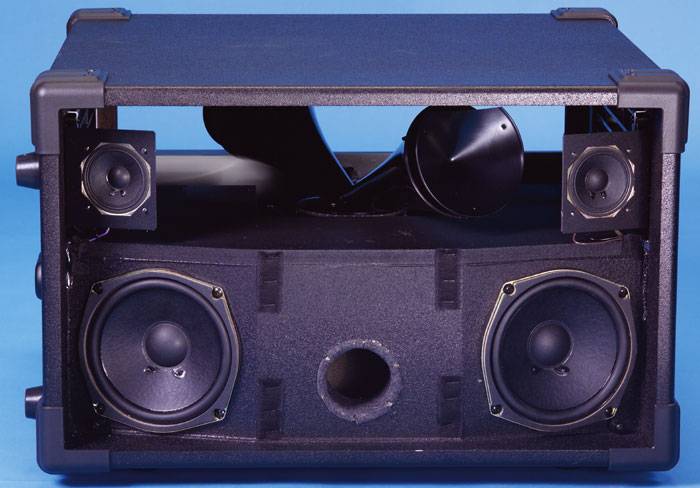 On the whole your classic Leslie is dived into three internal components, top middle and bottom. In the top is the treble rotor or horn where the high frequencies are sent to spin around. There is only one horn as the other is a dummy counterweight. The middle section contains the speaker drivers and the crossover (anything over around 800hz is sent upward) whilst the bottom houses the Bass Rotor which spins in the opposite direction to the treble rotor.

Part of the classic and difficult to reproduce elsewhere sound of the Leslie speaker cabinet is due to the fact that the speakers are different in weight and therefore as part of the sound you can hear the drag of the bass speaker as it takes longer to reach and sync with the speed of the lightweight treble horn. I have heard of modifications to the cabs to slow the bass rotor acceleration time right down by adding extra weights to the speaker to gain a new and different Leslie effect.

A lot of people mic the Leslie in a simple 2 mic pattern, on at the top one at the bottom and often the best recorded sound can be achieved by a very directional Shure SM57s. Sometimes a second mic on the bass rotor can add more depth to the effect when panned hard left and right. The skill comes in the positioning of the ‘treble’ mic as this can make a fair difference to the sound produced. In fact the new Leslie 2101’s have settings that simulate the angle and position of the mic by changing the sound that is emitted through the horn itself, on original Leslie’s however this was not possible.

Expanding on the above the regular studio technique is to have Two Shure SM57s on the treble rotor as well as a Senhiser MD41 on the bass rotor. The top the mics are usually angled horizontally at the outer diameter of the horns spinning pattern, as below:

You need to experiment with these techniques and the proximity of the mic to the horn as this can have two or three different effects; too close and you will pick up the flutter of the wind as it is displaced by the horn itself, also the brake sound can be quite sharp. Too far away and more of the growl and authenticity of the rotor is lost.

In summary for this section if you were to attempt a good single mic sound you would place one mic into the top rotor louvres 3″ to 12″ away from the rotor. You would probably find yourself pushing the pass in the EQ with this mic placement. For a good balanced sound between the treble and bass rotor use two mics on top and bottom louvres between 3″ to 12″ away. Finally to add that stereo studio sound place two mics on the top louvre and two on the bass and pass hard left and right.

One modification which is used consistantly in a live environment are microphone prepared Leslies. The good people at www.theatreorgans.com have a lot of information on this subject that I suggest you read as homework but basically they say that “A pair of small electret lavalier microphoes are permanently fastened to opposite corners of the treble horn compartment. Output from these mikes is connected to an external stereo mixer equipped with equalization – hopefully by a permanent connector fitted to the back of the Leslie cabinet – and hence to a stereo power amp and a pair of speakers located on either side of the stage. If a stereo PA rig is being used, the mikes can be fed into two channels of the front-of-house board and panned left and right. As with anything, “good taste” in EQ and general technique is required to achieve a good sound. Actually, bad taste might work well, too; try both.

Wind noise from the horn is not a problem, and minimum mechanical isolation is needed. Lack of wind noise is probably because the cabinet corners are “stagnation” or dead-air spaces. Wind noise, if present, can be reduced by using an open-cell (reticulated Scottfoam) wind screen on the mikes.

An obvious extension of this mike technique is to do the same with the lower rotor, and obtain a mixed top and bottom left and right sound. Apparently, the “top-only” technique works very well in a live situation, but might also serve the purpose for a studio Leslie.”

Theatreorgans.com have also interviewed a few sound engineers for their perspective on mic techniques:

“Jay Mark (Sigma sound, New York)has been pleased with a “tight” or “direct” Leslie sound, when recording organ. His principle reason for this is because the organ is used as background and not a featured instrument; the tight sound is needed so that the organ sound is very clear and unmistakable, even when way down in a mix. Jay has used the folloing setup with good results: an RCA 77DX ribbon at back of the top rotor cabinet, about 8 inches from the treble horn, with the high-end rolled of to suit. He also uses, at the back of bottom rotor, a U87 with the lows rolled off, and mixed with the top mike to suit. He remembers experimenting with the top and bottom sound panned left and right, and not liking the effect.

Allen Sides (Ocean Way Recording, Hollywood)prefers a pair of tube U67s, located about 5 feet away from the Leslie, aimed midway between top and bottom rotors, and spaced 10 feet apart. The mikes are panned left and right, and recorded on two separate tracks. Allen prefers the U67’s natural roll-off on the high-end for de-emphasizing the high-frequency distortion on top. He told me of recording Billy Preston, who played a Fender Rhodes electric piano with stereo vibrato, and sent each channel to two separate Leslies.

Joe McSorely (Veritable Recording, Ardmore, Pennsylvania) likes to use a pair of U87s mounted relatively close in top and bottom cabinets. For a “tight” organ sound, he rolls of the lows from the bottom rotor, but records the top flat. Joe echoes a repeating problem – wind noise up close – and he always uses windscreens on the mikes. He says that most organ Leslie recordings done at Veritable are on one track, but a great “fake stereo” mixdown effect can be achieved by panning the dry track to one side, and using a Harmonizer in the “doubling” mode on a second track panned full opposite. Joe describes the resultant sound as “monstrous”.”

Sound advice all round.

So what have we learned? Well basically that is is a matter of trial and error and that there are as many techniques for miking a Leslie as microphones at your disposal. My preferred one i Mono bass and stereo treble rotor miking, just close enough to hear the flapping noise of the break but not so its intrusive and in the way of the actually sound. I back off the bass mic a little more than the treble so it doesn’t dominate the sound. Treble pan hard left and right and bass dead centre.

Many a new Hammond or clone player will walk into the studio with e NEO Ventilator in their pocket and produce a 90% reproduction of a 147 within 2 minutes of recording (see my previous post on the Vent). It’s not as good but its pretty good 100% of the time. I suggest have both – but then I would wouldn’t I? 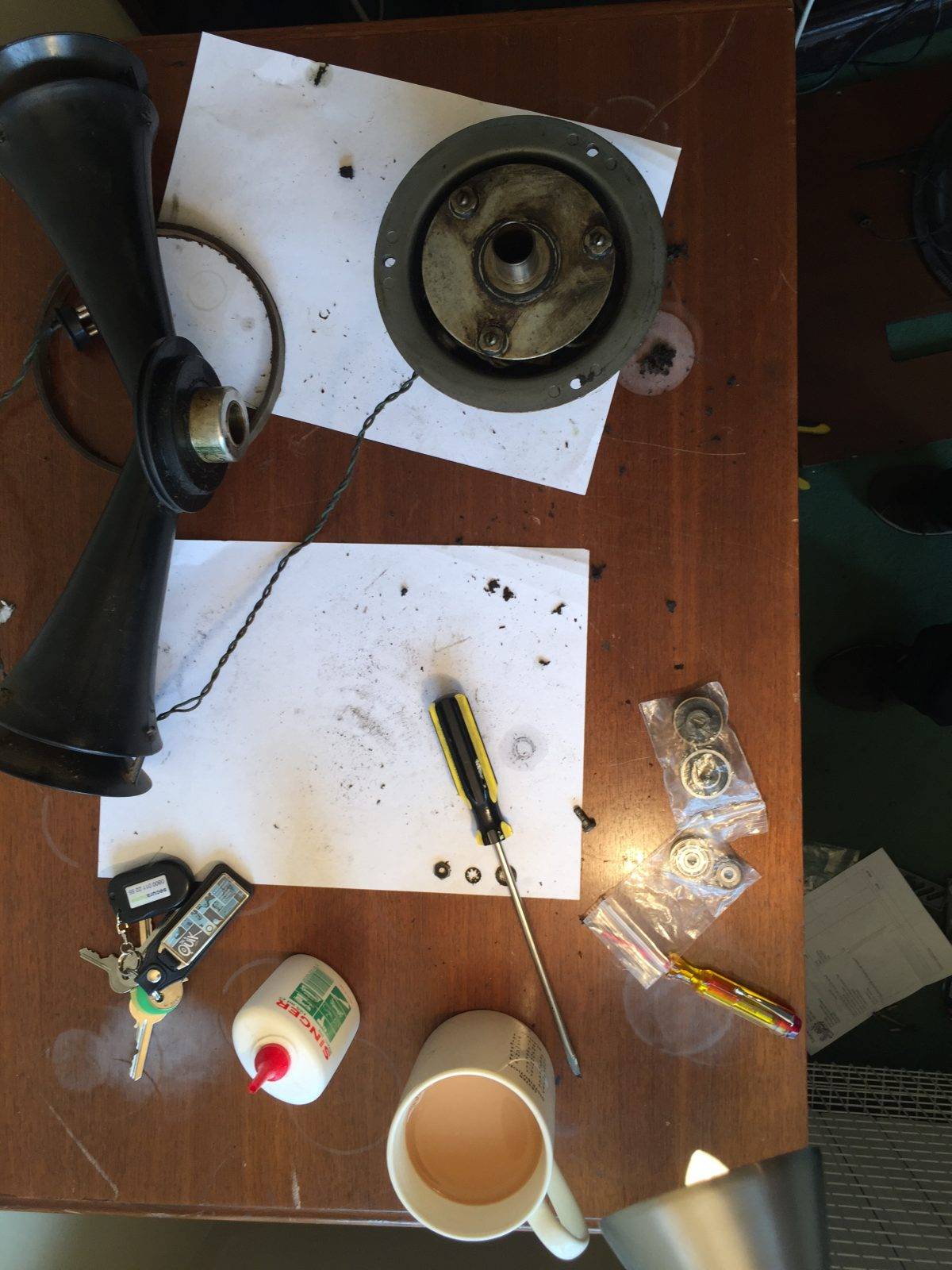 Leslie speakers, isn’t it about time you serviced yours? (part 1) 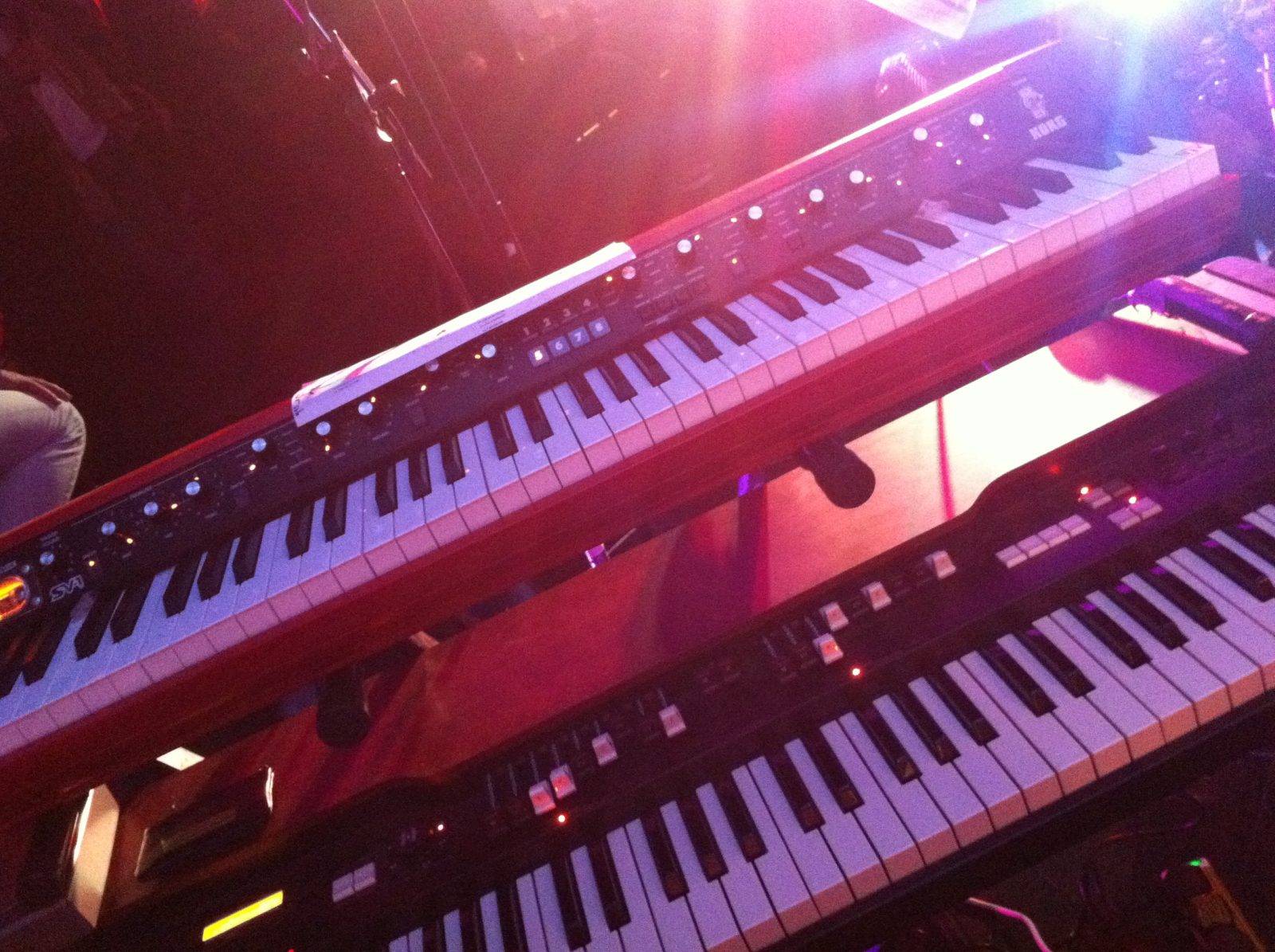 Live – Secret Diary of a Hammond for Hire